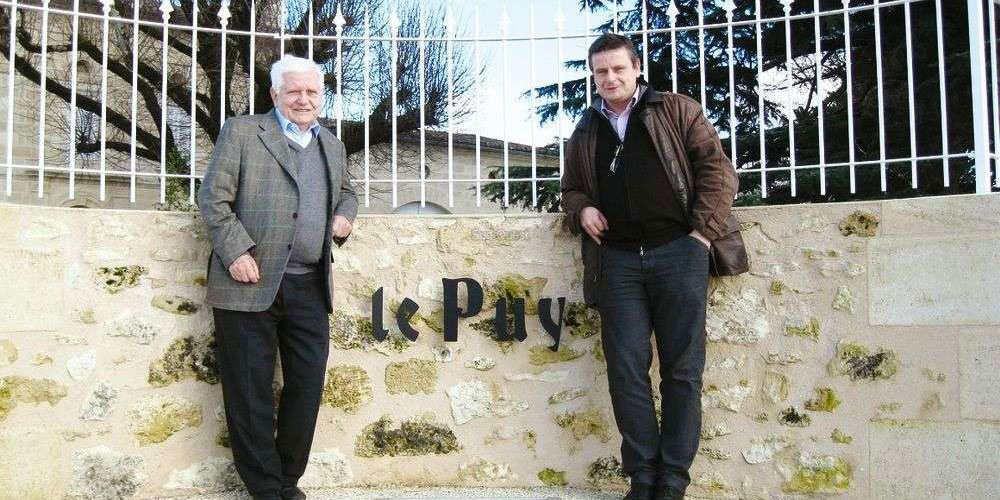 Another ‘Now In House’ special today- the last bits and pieces of our annual allocation of Chateau Le Puy’s ever glorious and ever in demand ‘Emilien’, at the store and ready to go. Brilliant stuff, and one of the hottest wines on the planet, we have about 10 cases of 750ml bottles left, two Magnums, and one Jeroboam. This might be your last chance- don’t miss them.

Le Puy is a legend. Bordeaux’s trailblazer for the Biodynamic movement and one of the hottest wines anywhere in the world. The attention has been building for years, slightly comically intensified by Japanese manga phenomenon ‘Drops of Gold’, which featured  young wine lovers in search of the world’s greatest wine. DRC, Petrus, the First Growths and Chave all feature prominently. But the winner, the Drops of God itself? Le Puy. The Chateau also got another global bump when they held a series of tastings around the world in 2017, showcasing the last one hundred years, with wines going back to 1917. I was lucky enough to take part in the New York edition, and the wines were mind meltingly good. Pascal Amoreau, the owner of the estate, puts it charmingly as “My wines taste old when they’re young and young when they’re old”. This is a wonderful line and sums it up perfectly for me- these wines are naturally made and have a delightful sense of earthiness in their youth. With age, the purity of fruit not only stays but gets stronger, and the wines develop into something less unusual than they are in youth. They become more just like a very very very very very good wine from a right bank megastar which I’d expect to come at the price of a small house. I’m talking as good as it gets.

Speaking of as good as it gets- 2016 is a vintage fit for the gods in the hands of the right Bordeaux winemakers. The hands could not be possibly be more right than those of Château le Puy.

No critic scores for this yet, and speaking honestly I cannot write a note that does the wine justice. The 2015 got 94 in Decanter and personally I prefer this- fruit, earth, spice, meat, intensity, drinkability, length, ageability, youthful charm, it’s all there. Buy the wine, drink it or keep it. Whichever you choose, you will love it.

More about the wine:

While Le Puy has never been one to attract ‘scores’, the press attention for the estate continues to roil. A full-length profile by Eric Asimov in the New York Times may be the best in show, but you don’t need to look far to see more. Jane Anson for Decanter has recently described it as ‘one of Bordeaux’s most overlooked wine estates’ and ‘an inspiring château that kicks against the usual definitions of Right Bank Bordeaux’.

Why is Le Puy so overlooked? Because it is different. I like different. As Eric Asimov writes, Le Puy is ‘marked by purity, precision, lightness and drinkability that encourages taking another sip. They have an intensity of flavor despite their grace, a combination more often associated with that other great region in the east of France…’

Indeed, there is more than a hint of the Burgundian about Le Puy. When we held a tasting of the wines back in 2016, it was striking how many of our regular Burgundy customers dove into these wines with gusto, and it’s no surprise that it’s among our Wine Director and Burgundy Warrior Ian Halbert’s favourite Bordeaux.  It’s not just the sense of elegance, purity and ‘grace’ that does this, but something in the character of those that make the wines.

The headline on Le Puy is very often Biodynamics, but their practices are really something a little more than that. The Amoreau family have been farming in this way or similar for generations, and long before such things were ‘codified’. The emphasis has always been on the soil, and on creating a truly independent farm- with wild animals and wild plants both allowed and encouraged, as well as resident horses, bulls, cows and sheep. The thinking behind this is that it creates a naturally healthy ecosystem for soil, as Pascal Amoreau says ‘When you work in a monoculture, it changes the fauna. You end up with more parasites than predators. The wild areas have more predators. You have to have wild areas around the vines to maintain a balance’.

These principles have aligned very well with those of biodynamics, but they came about independently here, and they will be there long after the current fashion for biodynamics cools off. Besides and most importantly, the wine is absolutely delicious. I am not one for the dogma of biodynamics or natural winemaking, I don’t insist on it. What I care about is what’s in the glass, and everything I’ve ever poured from Le Puy has been magical.